Berlin Business of the Year Award Goes to Sirois Tool

Berlin Business of the Year Award Goes to Sirois Tool 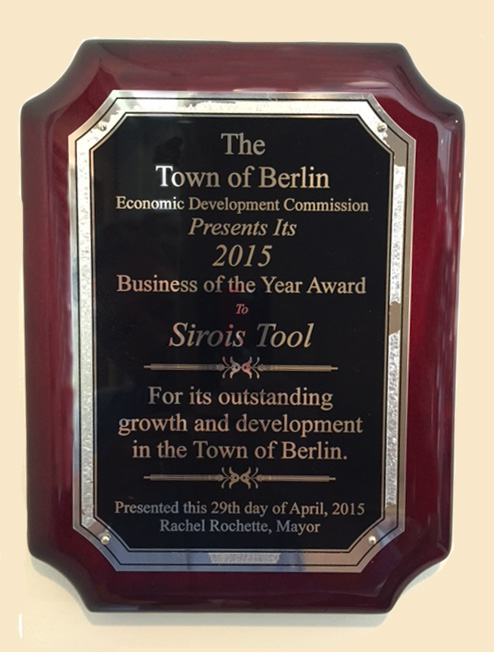 Mayor Rochette gave a brief background of Sirois Tool’s history during the award presentation held at the Berlin Chamber. Founded in 1960 by Robert Sirois as a manufacturer of cutting tools, it quickly moved to precision tooling manufacturing for the bearing industry, including low-volume machine parts and assemblies.

Today, “Sirois Tool has expanded internally and through acquisitions, including the purchase of Dow Gage in 2005 and All Five Tool and North American Spring Tool in 2012,” she said. The mayor noted the recent 5,000 square foot addition, which would allow the hiring of five to ten new employees to Sirois Tool’s skilled workforce.

“In addition to its emphasis on quality and customer service, Sirois Tool places a high importance on keeping its skilled workforce. The company offers very competitive wages and benefits and it is proud of its track record of retaining its employees,” the mayor said.

Mayor Rochette was honored to present the award to a company whom she said “continues to build upon the Sirois legacy of high quality products and reasonable lead times.”

In response to the Mayor’s generous comments, Ortner said, “I’m sure there are other businesses in Berlin that deserve this award too, but I am happy to accept the award on behalf of my Management Team, who is here with me, and all the employees of Sirois Tool.”