What is headspace and why is it important? 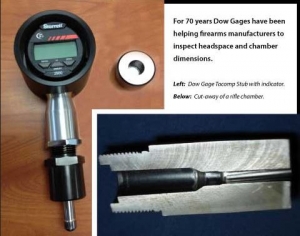 In the simplest terms, headspace refers to the clearance allowed between the base of a fully seated cartridge case and the face of a locked bolt or breech in a firearm.

Headspace tolerances are standardized for gun manufacturers by The Sporting Arms and Ammunition Manufacturer’s Institute, Inc. (SAAMI) to insure that U.S. made ammunition of a given caliber will function in U.S. made weapons of that same caliber. Since both ammunition and weapons chambers vary within allowable manufacturing tolerances, a small but controlled space must be maintained between the bolt or breech face in the chamber and the head of a “maximum” cartridge to insure proper and safe function of the weapon.

Problems can occur when headspace is either excessive or insufficient. Excessive headspace allows the ammunition to move too much in the chamber, and this can cause the case of the cartridge to stretch or rupture resulting in possible burns, cuts or eye injury to the shooter. Insufficient headspace may prevent closing of the action completely or require undue force to close it resulting in jamming of the weapon and failure to fire.

Firearms manufacturers use the SAAMI Chamber Specifications in their machining operations to control the distance from the face of the locked bolt or breech to a datum line or shoulder that stops the forward movement of the cartridge in the chamber. This seating point is often achieved in a reaming operation and is controlled by an established depth to a gage line or datum point. Holding this dimension to fairly close tolerances in the manufacturing process is what ultimately controls headspace.

For almost seventy years, Dow Gages have been used by firearms manufacturers to inspect not only headspace and chamber dimensions, but also firing pin protrusion as well as other dimensions commonly deemed critical to insuring a properly functioning weapon. We welcome the opportunity to work with your company.