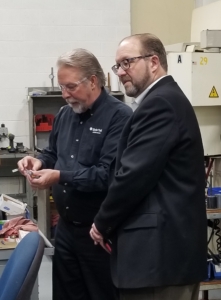 In his role as Chief Manufacturing Officer, Lavoie meets regularly with manufacturing companies throughout the state to discuss their concerns, challenges, and needs. He then brings those issues to our state government so they can be addressed, serving as a liaison between our state’s manufacturers and Connecticut’s government policymakers.

Prior to his current role, Lavoie was General Manager of Carey Manufacturing in Cromwell, CT and Vice President at ETTER Engineering in Bristol, CT. Ortner believes Lavoie’s background bolsters his effectivity as Chief Manufacturing Engineer.

“I’m happy to see someone with Paul’s manufacturing experience in this important role with the state of Connecticut”, Ortner said.

During the tour, the two discussed the positive steps the state has taken to help manufacturing in CT, as well as a few negative ones. They also addressed the voucher programs for manufacturers in CT and the Apprenticeship Tax Credit that has recently been made available to “pass through entities” like Sirois Tool.

As Chairman of the National Tooling and Machining Association (NTMA.org), Ortner also regularly meets with manufacturers, but his reach expands throughout the United States. At the end of their meeting, Ortner agreed to share with Lavoie the manufacturing data gleaned from those meetings.